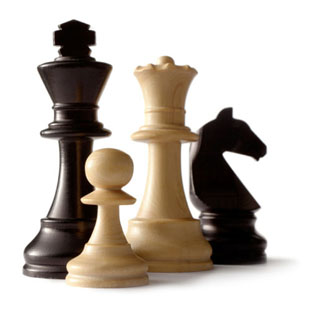 Chess is a two-player board game in which each player competes to trap the other side's king. It is played on a simple 64-square checkered board with 16 pieces on each side, much like checkers. In chess, there are more than 288 million possible board positions once each player has made their first four moves. Which of those they choose and whether it will win or lose the game for them is based on critical thinking and anticipation, not luck, making chess a game that's heavily reliant on strategy.

Each player has one king, one queen, two rooks, two bishops, two knights, and eight pawns. The object is to get the opponent's king into a position in which it cannot avoid capture. This is called "checkmate," which comes from the Persian "shah mat," or "the king is helpless." Some pieces are more powerful than others, and it takes expertise to understand and be able to use each piece's power to its full potential. Once one becomes more advanced in chess, more complex moves can come into play, such as castling and en passant, complicating strategy further. Mastery of chess strategy comes from understanding how each piece moves and how each move will affect the opponent's next move. To win, a good chess player must be always thinking ahead and visualizing their final attack.

Chess has long been recognized as a measure of skill and intelligence. It originated in India nearly 2000 years ago and quickly traveled to other parts of the Middle East and then Western Europe and Russia. In Persia, chess soon became an integral part of the education of children of nobility. During the Enlightenment of the 18th century, notable figures like Benjamin Franklin promoted learning valuable life skills like foresight and circumspection through chess. Chess has continued to have a place in education, and competitive play has evolved.

Chess is now overseen globally by the World Chess Federation (FIDE), and skilled players compete in tournaments around the world. The largest and most prestigious is the World Chess Championship, which is held every two years. Only top players from each participating country are invited to compete. Many other tournaments, both international and national, offer a chance for those players who have mastered the game to showcase their skills. Many chess players will aspire to win the title of chess grandmaster (GM), which can only be granted by the FIDE to the most accomplished competitors. The GM title is valid for life.

For hundreds of years, chess was generally played by only those of higher socioeconomic status. Now, however, people of all walks of life are learning and playing chess, and chess is more accessible than ever before. For individuals who have had some basic computer training and have access to the Internet or a smartphone, there are dozens of ways to play chess online. Aspiring chess players can play against the computer or against other players logged into the same system. Some online tournaments award electronic trophies to winners, which they can then display online.

More than 605 million people play chess across the world, most within Western and Northern Europe and the eastern United States. Knowing how to play chess is seen as a sign of intelligence and sophistication, and many schools turn chess into an extracurricular activity or even include it as part of regular classroom instruction. Many communities also offer one-on-one or group chess classes to teach the game.

Chess continues to be an integral part of international society and is growing in popularity as more and more people are exposed to the game and gain an appreciation of its complexity. With the rise of computerized chess programs and apps, this trend is likely to continue.

The History of Chess


Chess for Kids and Beginners